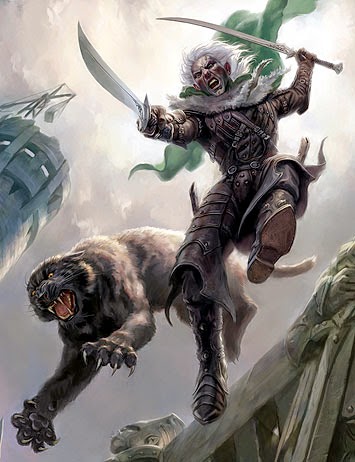 The Drow. Oh the Drow. This isn't a discussion about whats wrong with the Drow, though I will touch on that some. No this is about why cosplaying Drow is a bad idea. Now when white people see a Drow and they decide to cosplay they see this.

But what black people see is this. 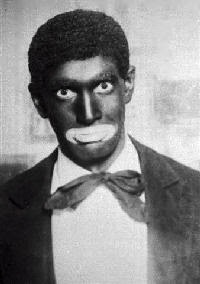 Although we are more likely to see this 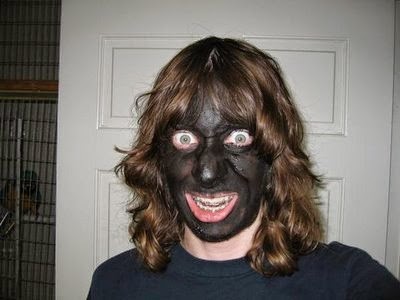 Two drastic images to be sure. So how do we get such different ideas on what cosplaying Drow means. Most of it comes down to the lived experience for people of color (black people in particular). As last Halloween showed ,when Julianne Houghe darkened her skin to look like her favorite character Crazy Eyes from Orange is the New Black, black people take the idea of black face very seriously. Even when it's not done to insult black people we still feel slighted. This has to do with racial scares that have never quite healed. I know on an intellectual level that a lot of time has passed between when black face was done as a way to degenerate an entire people and now. But as the events of last week show, sometimes we have not made as much social progress in regards to race as we like to think we have.

See I understand that white people see the Drow as cool. I personally don't. I think Drizzt is one of the biggest mary sue's ever. But I do understand that other people feel differently. The only problem is, what you guys see is cool is constantly being portrayed with in the setting as an evil and despicable race. The Drow (no matter the setting) are prejudged to be evil due to the color of their skin. Even Drizzt has to deal with people distrusting him because of the actions of his people. But what you guys see as cool, we interpret as something that plays to close to what we as people of color have to live through. Because I live in a reality in which I am prejudged by society based solely on the color of my skin. And as the past week has shown this can happen with deadly consequences. While you see something that is cool and awesome we see something that is an in game reminder of the challenges of being black in America. Worst yet, you can escape into the role and drop it whenever it suits you. Me, I don't get such an escape.

But what about intent you say. We aren't intending to be harmful with our cosplay, we are just portraying a character and race we really love. Intent does matter. But it doesn't matter the way you think it does. Intent matters in so much as it helps us separate what we see as a racist action from what could be a racist person. Because we know that you aren't intending harm we believe you aren't racist. But the insult is still there. And it still upsets us. I knew Ms. Houghe intent was not to do harm but to honor a character she cherished from an excellent show. That's why I never thought she was racist. However I did feel her choice was in bad taste.

Well what about Klingons you say. White people cosplay as Klingons and no one gets upset. And you would be correct. However ... and this is big and important Klingons are not in the same boat as Drow. The Drow are irredeemably evil. There is only one good elf among them. The embody so many negative characteristics in the setting that I tend to loose count. The Klingons aren't like that. They aren't used that way in Star Trek. For starters its important to remember that early Klingon weren't black. They had a more olive tan to them. And some were even white. Furthermore Star Trek worked very hard to make sure the audience understood that Klingons were not all evil. They were different to be sure. With a way of life that
we may not all agree with. But the Klingon race as a whole were not as a whole portrayed to be evil. There is also the evolution of the Klingon look. Klingons look sufficiently alien that when a random black person on the street sees one they know its a character. We can separate ourselves from that look. It also helps that Klingons aren't often cosplayed in coal black, which was the look of many black face minstrel shows. Most people in Drow cosplay still look human. So the shock is a lot more visceral.

Well Drow aren't African Americans you say. This is true. The Drow are not a real world parallel to black people. However the fantasy genre is very bad about diversity. We know humans come in any color but what about the demi human races? Fantasy rpg games have a tendency to have all white hero with all white heroic races. The evil races (who are often genetically evil I might add) on the other hand come in all shades of color, the worst being the Drow. So while we know they aren't a real world parallel we can see many aspects of hatred and racism reflected in how fantasy gaming as a genre treats people who are different from the core races. And it is this parallel that causes us to feel very uncomfortable when seeing people cosplaying as Drow. It's an association that too closely mirrors our lived experience. And in an environment where we are meant to feel welcome seeing that black face makes us feel less welcome.

Well cosplaying isn't black face you say. Technically you're right. But in application what you're doing is black face. The idea of black face isn't static. While yes it originally was meant to be white actors doing minstrel shows the concept of what black face is has grown. That's just how culture works. For instance the word gay is now taken to mean someone who is homosexual. However when I was growing up gay was just another word for stupid. And before that it was another word for happy. That's why when you're listening to the Flinstons theme song they say "have a gay old time". They are inviting the viewer to have a happy time, not a homosexual time. And when the Christmas carol Deck the Halls says "and now we dawn our gay apparel" they aren't inviting you to dress in drag. They are asking you to put on the cloths that make you happy. But now, now gay means homosexual. So using it to mean stupid is insensitive to homosexuals. It was a word I had to drop from my vocabulary for that reason. Even though to me, growing up, it had nothing to do with sexuality. The same is true of black face. It is no longer limited to minstrel shows and is pretty much taken to mean anytime someone dresses in black skin. We will never be cool with black face.

So whats to be done? Well in an ideal world I would love the Drow to just disappear. But I recognize that Drizzt and the Drow are a cash cow for Wizards of the Coast. But it would be nice if other gaming companies kinda recognized the issue and publicly made better attempts at diversifying their demi human races, both in art and story direction. In the meantime if you feel you must cosplay as a Drow then please please consider doing the purple skinned Drow. The coal (or obsidian as WotC now describes them) black Drow isn't the only shade they've been depicted in. They've also been purple at times. And cosplaying as a purple Drow gets the point across with out offending a segment of the gaming community. But the black skin Drow is always going to be perceived as black face, no matter how you slice it.

Black gamers want to feel welcome at events like Gen Con and DragonCon too. We want to feel like we are members of the community. Hell we want to cosplay as elves with out people assuming we're an evil elf. So before you put on that black make up for your Drow costume, just remember that black face image tells a lot of gamers who are different from you that we aren't welcome.
Posted by Dace at 9:28 PM